Most investors want to get richer and this is why they will never exit the stock market. In the last 50 years, the Dow is up 39x and since March 2009, it is up almost 5x!

As Jeremy Grantham said, stocks are in an “epic bubble.” Still, most investors ignore this since greed dominates their emotions. If stocks are up 3,800% since 1971, there is no reason why it shouldn’t continue… 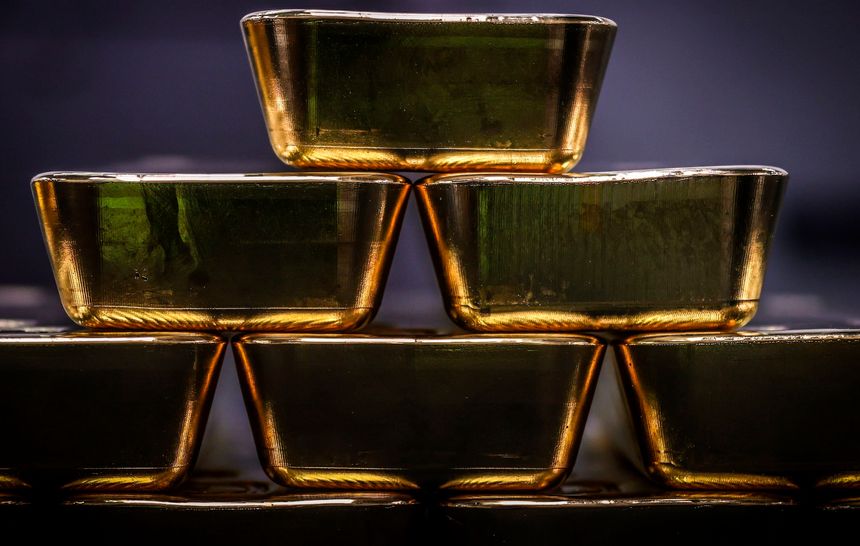 During the last 50 years we have seen 5 vicious corrections in the Dow of  between 41% and 55%. But even with these corrections the Dow is today 39x higher than in 1971.

There is another relatively small but important investment asset which represents only 0.5% of global financial assets. That asset is up 53x since 1971. But it hasn’t been an easy journey for this asset either. There were 3 major corrections in half a century between 33% and 70%.

I am of course talking about gold.

But we must also remember that a stock index doesn’t tell the truth. Unsuccessful or failed companies are continuously taken out of the index and the most successful companies added. Therefore an index gives a much rosier picture than what really happened. 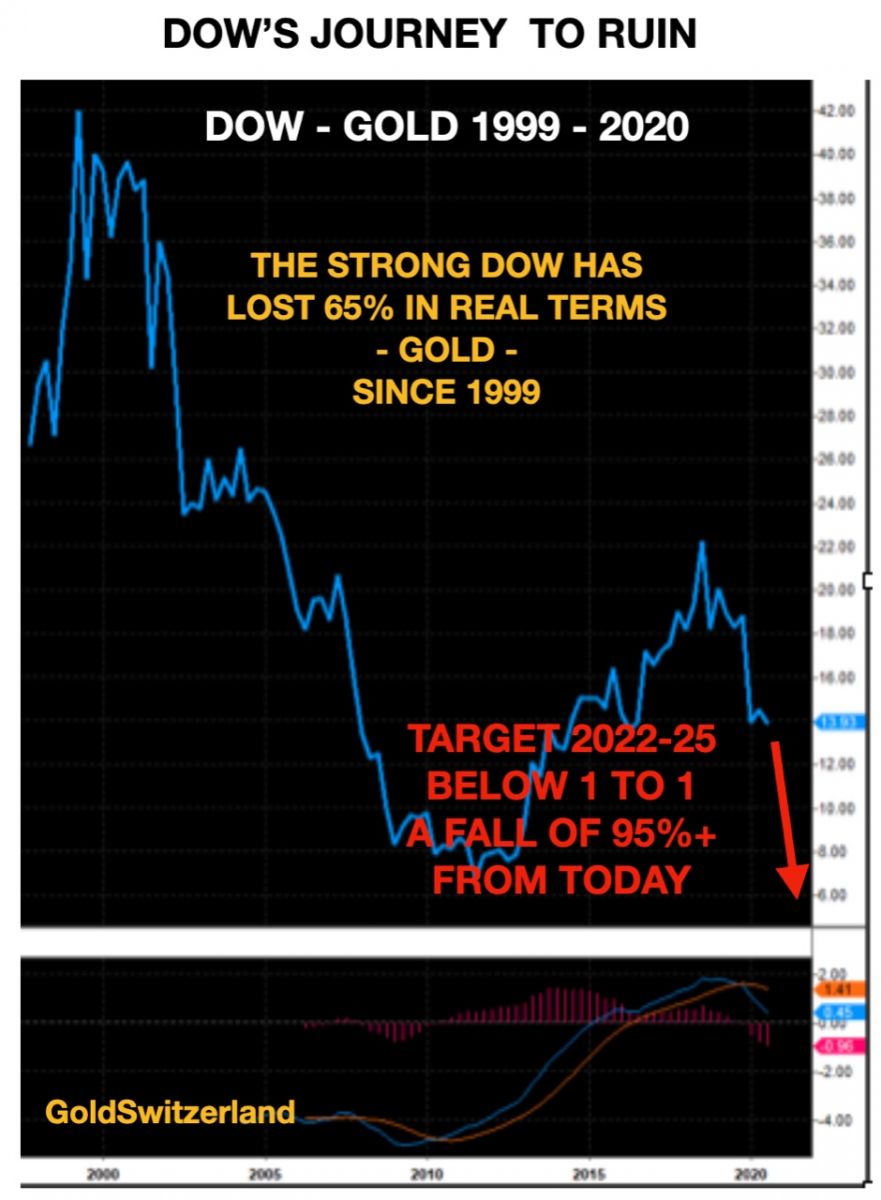 All of the above is history. Even though gold has yielded an acceptable return, it is what happens to the Dow/Gold ratio in the future that determines if investors should stay with stocks or hold gold.

The chart below of the Dow-Gold ratio gives us the answer.

Since then the downtrend has resumed. The indicator at the bottom of the chart is the  quarterly MACD which is a very important indication of the long term trend. The MACD turned down in 2019 for the first time since the 1999 top. This is a very strong sign that the Dow/Gold ratio has now resumed the long term downtrend.

If we then look at the long term picture of the Dow/Gold ratio, it gives us a very good idea of where we are heading. The initial target is a ratio of 1 to 1 as in 1980 when the Dow was 850 and gold $850. That would involve a 94% fall from here. But the ratio is very likely to reach the long term downtrend line of 0.5 to 1. This would be a 97% fall from now. 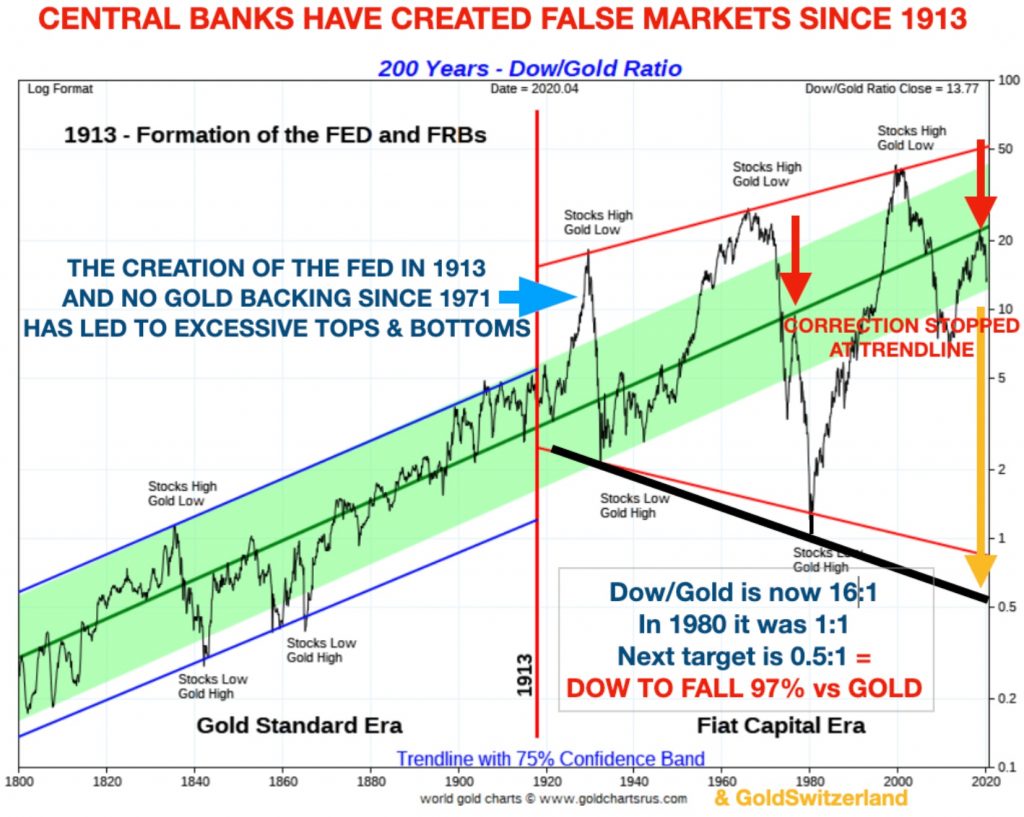 So the Dow falling by at least 97% against gold by 2025 seems very likely. Since these kind of moves very often overshoot, we could easily see a Dow/Gold ratio of 0.2 to 1 which would mean a 99% fall of the ratio from today. For confirmation of major overshoots of the green Confidence Band, see extremes in 1929, 1966, 1980 and 1999. What this would mean in the nominal price for gold or the Dow is totally irrelevant.

STOCK INVESTORS WILL BE WIPED OUT

Instead, stock market investors should now have sleepless nights as they are about to lose up to 99% of their wealth within the next 5 years.

I repeat, holding stocks could totally wipe out all your financial wealth in real terms by 2025. 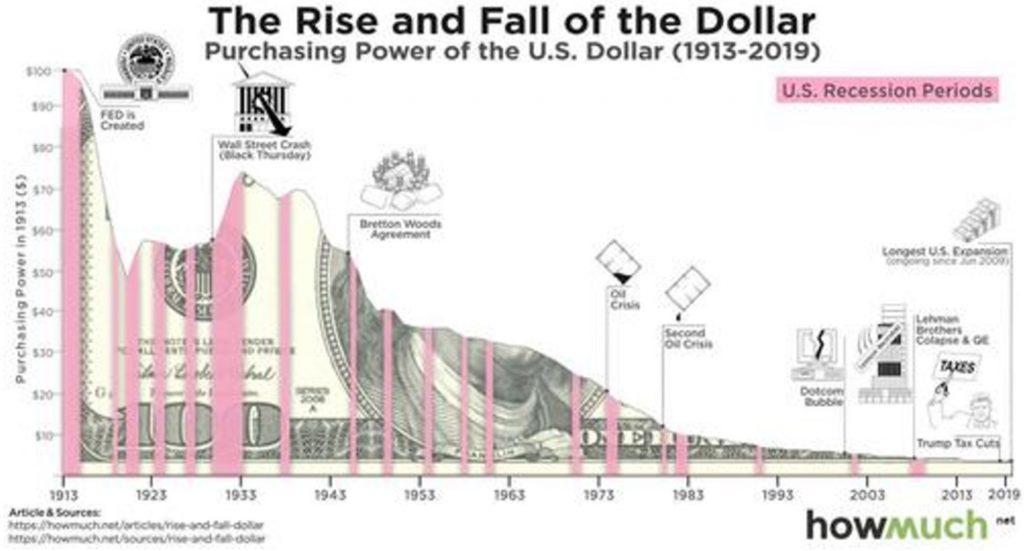 The repercussions would obviously be devastating not just for private investors but for pension funds, institutions, as well as for the global world economy. 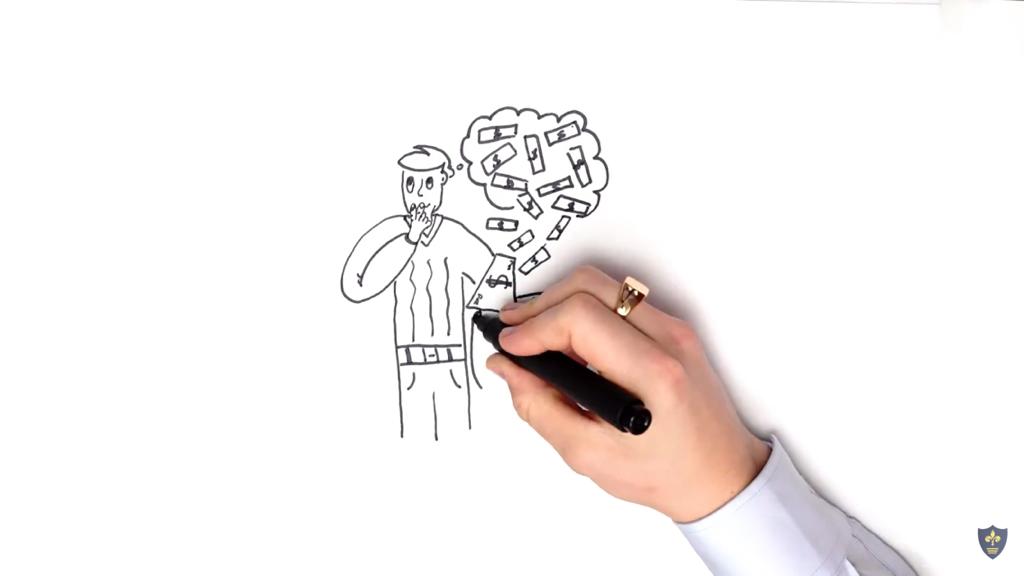 It would lead to a highly destructive deflationary depression after a short lived hyperinflationary period as central banks apply the only trick they know – UNLIMITED MONEY PRINTING.

But this time the world will finally discover that printed money has ZERO value.

And so will the holders of US dollars as the greenback as the US currency finishes its (just over) 100 year move to its intrinsic value of ZERO. 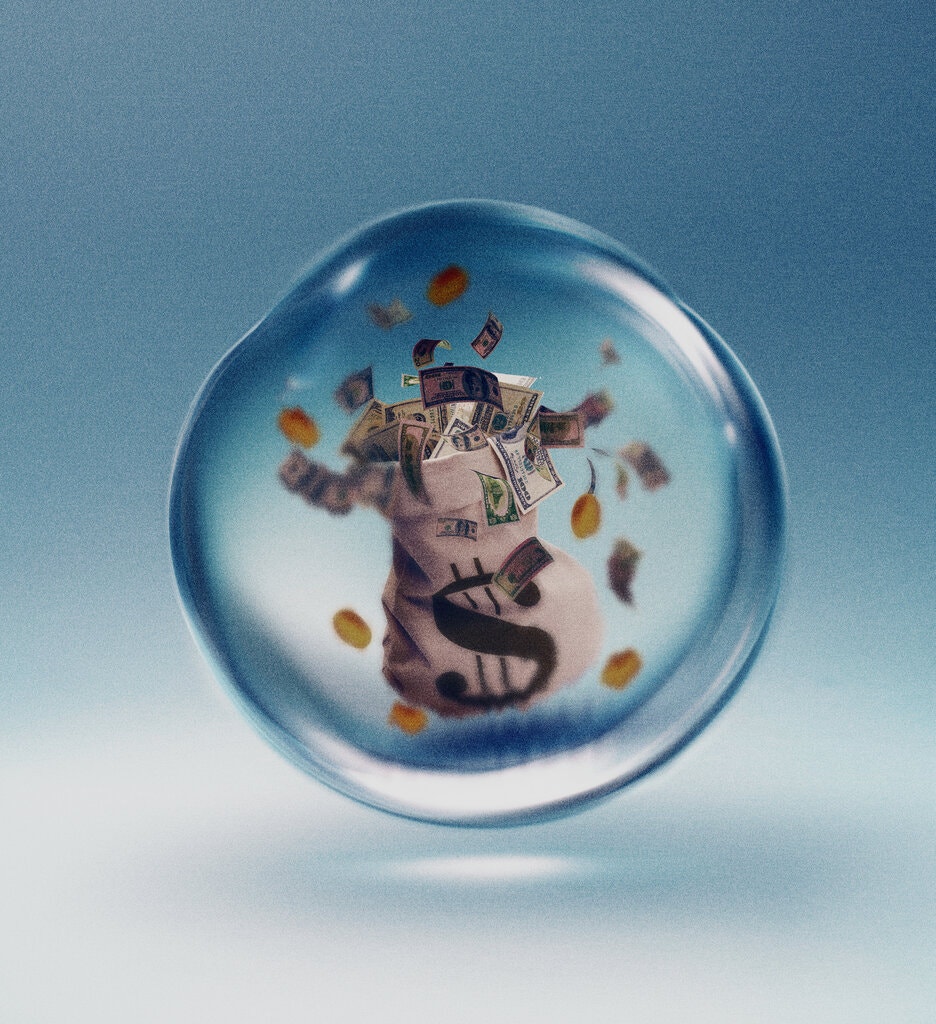 As Jeremy Grantham said, we are now seeing an epic stock market bubble that is about to crash in the next few months.

But sadly we are not just going to see a stock market crash but the end of at least a 300 year era and maybe a 2000 year cycle.

With the world fast approaching economic paralysis and physical lockdown, it is difficult to see how this can end well.  Instead, what is now in front of us can only end badly and most probably VERY BADLY.

As I have stated since September 2019, the current problems started at that point with major pressures in the global financial system. Accelerated money printing ensued.

And by February 2020, global central banks were extremely pleased that the pandemic allowed them to attribute an excuse for the panic situation they were in. So Covid is not the reason for the world’s catastrophic situation. No, Covid was just the most horrible catalyst that will guarantee that the global bubble era will have the most devastating end.

Covid allowed central banks to create a Niagara Falls of printed money and debt,  gushing down chaotically over the world.

And this without having to explain to the world that the financial system was already broke before Covid. The extraordinary money creation that is now taking place will be criticised by very few. 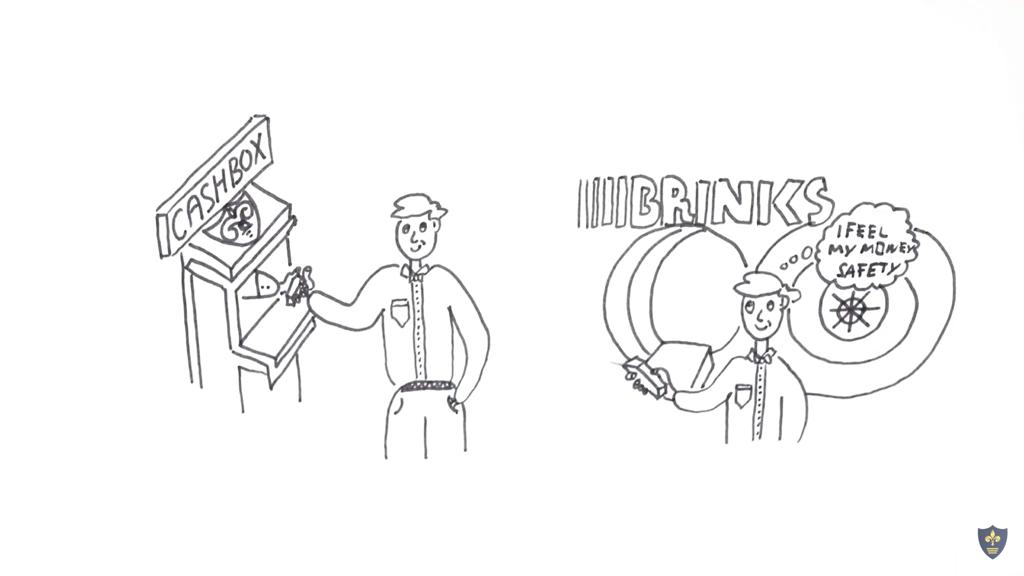 So what should investors do?

It is pretty obvious to some of us.

Bonds might hold up for a bit longer but the bond market will have the most spectacular crash in the next couple of years as central banks lose control of credit markets and interest rates.

Buy insurance and wealth preservation in the form of physical precious metals (GOLD  and SILVER) and some mining stocks. Remember that if you hold any stocks within the financial system you are exposed to counterparty risk.

Precious metals will clearly not solve all our problems as the world economy implodes. But it is better to hold the only money that has survived in history. In virtually every period of crisis in history gold and silver has been a surety.

As I have often made clear, the most important protection and asset in difficult times is a circle of family, close friends and other people who you can rely on. Helping others will be critical in the coming years… Learn more How To Start Your Own Digital Business.

Learn More via our Webinars